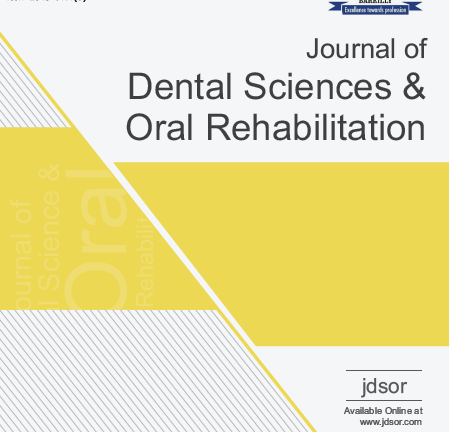 Knowledge, Attitude, and Barriers toward Evidence Based Dentistry among Dental Practitioners in Rohilkhand Region - A Cross-Sectional Survey

Introduction: The concept of evidence-based practice in dentistry is to provide patients with current treatment that research
has shown to be safe, effective and efficient. Ultimately, the goal of evidence-based practice is to continuously improve patient
care based on new research developments. This article highlights the awareness in the minds of previously un-informed
dentists as well as to demonstrate the need in continuous professional education through seminars, updates, lectures and shortterm courses. Hence, the aim of the present study was to describe the knowledge, attitude, and barriers of dentists toward the
concept of evidence-based dentistry (EBD) in Rohilkhand region, Uttar Pradesh, India. Materials and Methods: A crosssectional survey was conducted with the help of a questionnaire conducted among 300 dentists practicing in Rohilkhand
region. The questions covered the participant’s level of knowledge and use of EBD. Results: Majority of the respondents were
male (76.7%) aged between 25 and 40 years. About 37.7% of these respondents were in general practice with about one-thirds
of all respondents having been in practice for <5 years. Although more than half of these respondents reported being aware
of the concept of EBD, only about one third chose the correct definition. About 54.1% dentists agreed that was an important
concept in practice (54.1%). Conducting continuing dental education programs was found to be the most recommended option
for increasing the awareness of evidence based dentistry. Conclusion: EBD was not a familiar concept to these dentists; the
majority of them preferred consultation with colleagues over seeking evidence from electronic databases.
Key words: Evidence-based dentistry, trends, knowledge, Rohilkhand region

The use of magnification to perform various procedures in the medical and dental field has long been recognized. Ironically,
the practice of microsurgery in periodontology has not been widely promoted. The purpose of this article is to highlight
the practice of microsurgical principles in several periodontal surgical procedures and thereby emphasize the integration of
microscope into periodontal procedures.
Key words: Magnification, microsurgery, visual acuity, wound healing

Mucormycosis is a distinct angioinvasive infection caused by filamentous fungi belonging to the Mucorales order of the
Zygomycetes class. Mucormycosis has surpassed candidiasis and aspergillosis as the third most prevalent invasive mycosis in
patients undergoing hematological and allogeneic stem cell transplantation. Mucormycosis is still a concern in patients with
diabetes mellitus in the Western world. Furthermore, this disease is becoming more widely recognized in newly developed
countries, such as India, in people who have uncontrolled diabetes or in cases of trauma. Data on radiologic features on this
type of mycosis are scant. This review aims to throw light on imaging features of mucormycosis which help in early diagnosis
and prompt treatment of the disease.
Key words: Advanced Imaging, Conventional Imaging, Diagnosis, Fungal Infection, Mucormycosis, Post-COVID complications

Three-dimensional (3D) technology has been widely used in orthodontics in recent years. Conventional computed and
cone-beam computerized tomography (CT/CBCT), ultrasonography (USG), magnetic resonance imaging, and surface
scanning, intraoral scanning are some of the 3D technologies in orthodontics. The purpose of this article is to review the
currently available orthodontic appliances which utilizes 3D technology such as the principles in 3D imaging and its possible
applications of 3D facial imaging in orthodontics, the different techniques of 3D imaging of the teeth as well as the recent
efforts to create the “virtual orthodontic patient” with the help of 3D soft- and hard-tissue data. This article is basically a brief
narrative review of some of the commercially available 3D-based technologies in orthodontics.
Keywords: Three-dimensional, cone beam computed tomography, clinical use, computed tomography, intraoral scanners, magnetic
resonance imaging

An ideal implant system should retain all the favorable features of existing implants that contributed to high survival rates,
and introduction of novel features to facilitate new clinical applications like better integration of the peri-implant soft tissue
and a transmucosal interface that can accommodate deficiencies or changes in the peri-implant mucosa profile. Surface
properties largely contribute to the biological and clinical performance of implants and abutments as long-term success rate of
a dental implant system depends on its integration with the patient’s soft and hard tissues. Numerous manufacturing methods
and surface managements have been developed for regulating the surface micro-topography, nanostructures, and chemistry.
Among all, implants prepared by anodization have shown significant long-standing clinical performance. This article describes
a recent implant system in dentistry with collective surface chemistry, topography, nanostructure, color, and surface energy
features that are likely to address few limitations of foregoing implant systems.
Key words: Anodization, dental implant system, mucointegration, osseointegration, soft-tissue attachment, surface chemistry

Following endodontic surgery, root-end filling materials are widely employed; however, their influence on neighboring soft
tissues is unknown. Exposure of the affected area, root-end excision, and preparation and implantation of root-end filling
material are common clinical procedures. This article offers a review of the literature on the materials that have been
recommended for clinical usage as root-end filling, as well as the change toward the present materials of choice.
Key words: Amalgam, Glass Ionomer Cement, Bioceramics, Mineral Trioxide Aggregate, Periapical Surgery, Root Canal
Treatment

Anatomy of Root Apex and it’s Significance in Endodontics

The anatomy of root apex is an area of interest to the endodontist. Endodontic treatment aims to remove micro-organisms from
the root canal system while also preventing reinfection. To achieve this objective, it is important to understand the anatomy
of this region in detail. There are various morphological landmark in this region, namely, apical constriction, apical foramen,
root apex (anatomic and radiographic), and cementodentinal junction for better outcome, it is important to understand their
variation and contribution in endodontic success.
Key words: Apical constriction, Apical foramen, Cementodentinal junction, Root apex (anatomic and radiographic)

Pan facial injuries are multiple injuries of the face that involve the upper third, middle third, and lower third of the face. Pan
facial injuries occur majorly due to road traffic accidents and physical assaults. Because of multiple facial injuries, it is difficult
for the surgeon to re-establish facial contours and regaining anatomical and functional work of the facial region. Persistent
deformity of the facial skeleton can occur due to inadequate reduction of all the component of fractured segments or lack to
stability in fracture bones. To diagnose multiple facial injuries a better clinical evaluation is necessary and 3 Dimensional
computed tomography scans are gold standard in evaluating displaced, non displaced fractures, and finding multiple injuries
of the facial region. Treatment protocol for pan facial fractures can be closed reduction or open reduction internal fixation.
This case report tells about a brief discussion on the management of a 25-year-old male patient who had suffered from multiple
facial injuries.
Key words: Clinical and radiographical evaluation, panfacial injury, persistent deformity, road traffic accidents

In this post-COVID era, the changing trend in the pattern of osteomyelitis and prevalence of mucormycosis has been on
tremendous increase and requires utmost concern. The early diagnosis and aggressive intervention followed by antifungal
therapy is the key to a successful treatment of mucormycosis in maxillofacial region. Therefore, in this case report, we will
be sharing one of our cases treated in our department of oral and maxillofacial surgery and its intraoperative observations and
hurdles that were encountered.
Key words: Antifungal therapy, fungal osteomyelitis, maxillofacial, mucormycosis

Depigmentation: A Report of 2 Cases